Tracy Schlapp and Daniel Duford are an amazing husband and wife team who own and operate the print shop and design collective, Cumbersome Multiples. Both artists, Tracy and Daniel are story telling not just through print, but through many forms of art. Seeing life as a collection of random events, they are connecting the pieces together through art to sell a story, much like a seamstress sewing a patch work quilt.

The Press: All things happen for reason, or so it seems. Tracy was bequeathed an old letterpress from a friend. The press is an amazing piece of machinery, based on very old technology.  It’s mostly a manual operation, with old wooden blocks in different fonts for the type. Beautifully crafted itself, the functioning letter press is an expression of art itself in this era of instantaneous forms of communication. 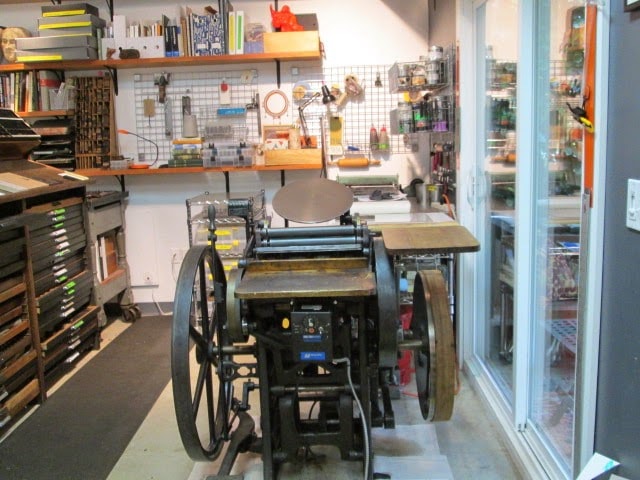 Story Telling:  Tracy felt a calling, or responsibility, to share this gift by using it as a platform for conversation and for telling her story. As a graphic designer and former English student in college, the letterpress is the perfect medium for connecting the two forms of art. Cumbersome Multiples prints custom designed cards, packaging and stationery for everyday and for special events. In Tracy’s and Daniel’s own words, “Cumbersome Multiples collaborates with artists, writers, chefs, letter writes & dreamers to make a mark in the world.” (www.cumbersomemultiples.com).

John Henry Tweets: One exciting current project is John Henry Tweets, Tracy takes the letterpress to public speaking events, such as poetry readings, lectures, and talks. During the event, she creates broadsides of  ideas or words that resonate with her, much like posting a tweet. But unlike a tweet, creating a broadside takes time. It must be visually appealing. Tracy is also working with a finite number of letters for the type, with some fonts not including the entire alphabet. The broadside is a tweet morphed into a form of print and artistic expression.

Conversations: The broadsides become conversation starters. Tracy places the printed broadsides on an easel in the back of the room. She also photographs the broadside and tweets the photos. What a fascinating juxtaposition of old and new technology!  Follow the tweets at @johnhenrytweets.

Daniel’s Stories: Daniel also tells stories through images. For Daniel, the story comes first, not the medium. These are stories he feels compelled to tell.  There is the series of bird houses, where each exterior and interior side tell a story through images, much like a three dimensional comic book.

The Tales of Trees:   Daniel is currently working on the “witness trees,” where he is capturing on canvas the stories told by old trees in the neighboring park. The old trees, he believes, have witnessed many changes in the neighborhood, both culturally and naturally, and are a stage for children to play and interact.  Daniel visits the trees to learn what they have to say.

The Business of Art:  Working as artists is much like operating a start up business in perpetuity, Tracy explains. They are constantly seeking funding, such as grants, investors, and support. Yet, success is measured by yard sticks other than monetary success. Through art, they are expressing solutions to problems that are built over time, using multiple approaches. Tracy believe this process is where growth and change happen. “It’s liberating, like learning to drive a car.” Sometimes they need to step away, and just take a walk or soak in the tub.

The Story Continues: The story of Cumbersome Multiples is much larger than I can attempt to tell in this post.  They are two very amazing people and incredible artists, who are sharing their talent with us.  I would encourage everyone to visit their website at www.cumbersomemultiples.com and to follow their tweets at @johnhenrytweets.com., to learn more about them and to expierence the wonderful work they are doing.